Everyone who knows me knows I just love, love, love Mystery Science Theatre 3000.  The 90s cult show about a guy in space forced to watch bad movies with his robot palls.

It combined to  of my absolute favorite things vintage (in the form of cheesy old movies) and sci-fi, in one cute and quirky package.   In fact I'm so crazy about MST3K that for Weasley's 5th birthday one of his gifts was a Gizmonic jump suit like the one MST3K host Joel wears. 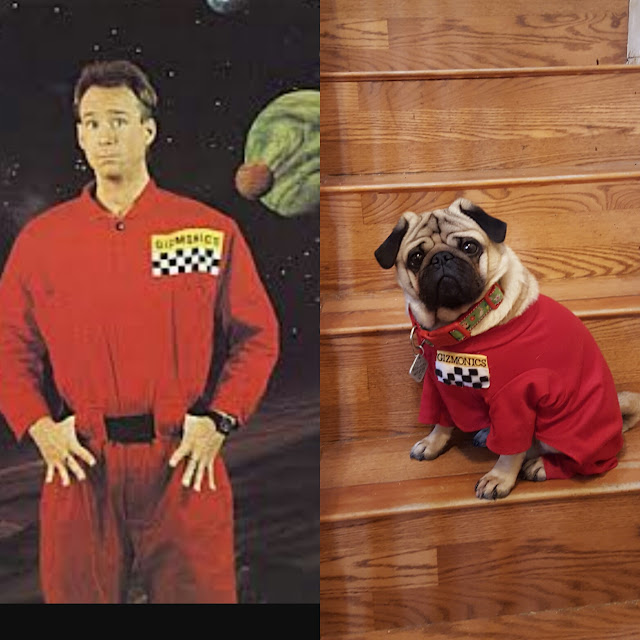 Deb from Pug Possessed made it and she did an amazing job.  I decided Weasley's jumpsuit is the perfect segue way into an MST3K essential episodes post.  Now as you can see I have a lot of MST3K box sets: 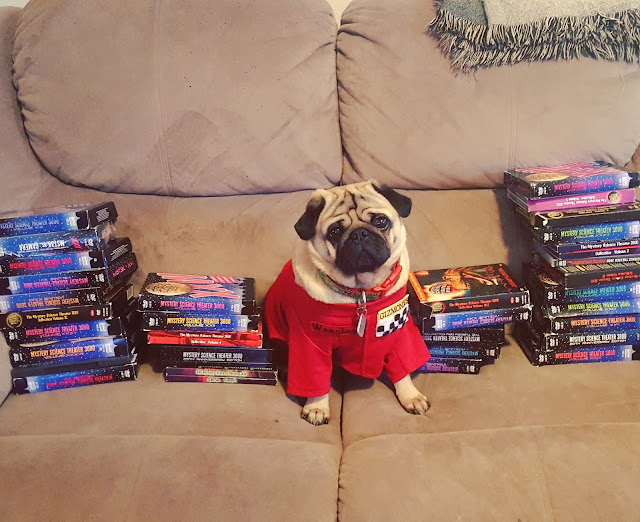 and would you believe I don't even have all of them!  Some are really hard to find.  So it wasn't easy picking 5 essential episodes and these aren't even necessarily my favorites, they are just 5 I really like (this blog feature may have to be ongoing).  Here they are in no particular order:

1) Manos The Hand's Fate: The uninitiated bad movie viewer who asks the questions How bad can a movie really get? and How funny can a bad movie be?  Needs to watch this crazy thing.  It was made on a bet by an insurance and fertilizer sales man, he also plays father in the film.  I guess he won the best because the movie is pretty famous now..   The resulting film is completely incoherent and totally hilarious.  It also features a black toy poodle though he comes to a tragic end.

This episode also features the hilarious Chevrolet short, Hired!  Manos The Hands of Fate is available on Amazon for $12.99.

2) Cave Dwellers  This 1984 Italian fantasy film was featured in the first episode of the third season of MST3K.   It is a swords and sandals type film and a pretty dreadful rip off of Conan the Barbarian, but boy is it funny.  Along with a brain dead hero, a mute side kick, and heroine that looks like she is on the way to the mall, it features a snake that growls.  That alone makes it worth watching.  Here is Joel introducing the episode for a Turkey Day special he did in 2013.


Cave Dwellers is part of the volume 2 set of MST3K and is now horrifyingly expensive, but you can rent it from Amazon prime for a reasonable price.  Also Cave Dwellers is part two of a trilogy, yes there are three of these dreadful things, and part 1: Ator, The Fighting Eagle is now available on the Riff trax website.  It does not disappoint.


3) Laser Blast-This 1978 sci-fi film was aired during the 7th season of MST3K.  It has Roddy McDowell of Planet of the Apes fame in it and some seriously awful clay mation effects.  The bots and Mike make plenty of jokes about the fact that revered film critic Leonard Matlin gave this turkey two stars.   Mike also has a fun segment where he pretends to be Star Trek Voyager's Captain Janeway

Laser Blast is available as part of the MST3K 20th anniversary pack
and it can be streamed on Netflix.

4) The Giant Gila Monster- This cheesy 1959 monster flick was shown during the shows 4th season.  Unsurprisingly there are a lot of giant (insert animal) movies shown on MST3K but this is my favorite.  The plot is typical 50s monster fodder, peppy teens are plagued by a giant Gila lizard (a very obviously normal sized Lizard walking past toy cars).  The songs and doofy dialogue make this a classic episode.

The Giant Gila monster is available as part of Volume 10.2 (now rare and pricey) or you can stream it on Netflix.


5) Teenage Strangler-This 1968 teen murder mystery was aired during the shows 5th season.   Basically teenage couples are being viciously murdered and the prime suspect is Jimmy a high school student with an incredibly dweeby younger brother.  Then surprise!  It was the school janitor all along.  Hi-light's include the bots tricking Mike into wearing a pair of glasses that turn him into Mikey Jimmy's whiny younger brother from the movie:

If you want a funny, silly, vintagey show you just cant  go wrong with MST3K it's like watching cheesy movies with your friends, if your friends where incredibly funny.
Posted by tubby3pug at 10:37 AM 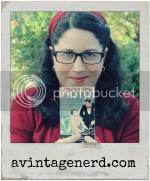