I have great appreciation for the fruit of the grape and the grain, but since I love the 1920s I also have a fascination with prohibition, and besides it seems most people drank more during prohibition.  I particularly love stories about the NYC speak easy culture and the flappers.  Recently I watched the Ken Burn's documentary Prohibition on Netflix and I really enjoyed it.   Since I love silent movies I was very interested in the short propaganda film, What Drink Did, a clip of which was in the documentary, I was excited to find the whole film on you tube. Made in 1909 the film was wildly popular and was screened all over American, becoming a major tool in the Prohibitionist movement.   Here It is:

In the spirit of the film and because everyone needs a break from cocktails now and again here are three delicious old fashioned non-alcoholic summer drinks.

1 cup fresh squeezed lemon juice
1 cup watermellon puree, from about 1/2 half of a small watermellon, strained to remove seeds
1/2 cup of simple syrup, cooled, or more to taste.  To make this simply heat 1/2 cup water and 1/2 cup sugar together in a sauce pan over medium heat and stir until the sugar disollves.
3 cups cold water

Stir everything together in a large pitcher and chill completely.

Sasparilla is a great old timey soda, similar to root beer, that was very popular in the 19th century, when it was considered to be a health aide.  It is pretty hard to find it now  but a few brands exist.   I used P&H Soda's Sasparilla Syrup. They make their syrups from natural ingredients in Brooklyn and you simply add Seltzer water.

Put the ice cream in a tall  chilled glass and add the root beer.  Enjoy!

I'll be going on blogger break for about a month to enjoy my end of summer break from teaching, but I'm sure I'll be on instagram.   Enjoy the end of summer!
Posted by tubby3pug at 5:17 AM 4 comments:

Sunday, August 11th, marks the birthday of an actress who appeared in some of the most stylishly influential American films.  Helen Broderick,  was a comic supporting character in the Astaire-Rogers films Top Hat and Swing Time.  She started her career in the 1900s as a chorus girl and moved onto lead stage roles by the 20s.  By the the time she began appearing in films in the 1930s Ms. Broderick was already in her forties, an age when at the time a women was considered a bit past her prime.  While Ginger Rogers as the young star certainly got the most dramatic, and the best costumes, Helen Broderick had some pretty cute outfits too, and with her pitch perfect comic timing she stole plenty of scenes.  Below are a few of her best looks. 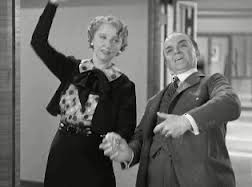 The July issue of American Vogue had an article on the return of the grunge look.

Now I don't have a problem with the grunge look, I actually kind of like it, although its definitely not something I'd wear myself.   Its return does make me feel a bit old as I distinctly remember being 14 years old and being excited that clothing very much like what I was already wearing was in the countries biggest fashion magazine.

Anyway, there are plenty of things I loved about the 90s, and wish could be brought back.  Including the hilarious and quirky show Mystery Science Theatre 3000 (MST3K),  in which a guy and his robot palls are trapped in space and forced to watch some of worst movies ever made.  Sadly, Mystery Science Theatre was canceled in 1999 after 11 seasons.

The good news is that MST3K, or a version of it, is back with Riff Trax.   The new version consists of digital downloads of either complete movies or commentary soundtrack that you can play in concordance with a popular film and hear the actors from MST3K riffing away.  Anyway, it was through Riff Trax that I discovered something that should most definitely stay in the 90s.   The movie Cool As Ice.

This hilariously horrible movie stars the rapper Vanilla Ice wearing some of the most hideous clothing ever conceptualized.

Riff Trax has it in their online catalog and you can download it and watch every unbelievable awful moment while listening to the MST3K writers side splitting commentary. My favorite part being the abandoned construction site love scene montage.

If you are a fan of MST3K you really should check out Riff Trax and even better get tickets to the Riff Trax live showing of Star Ship Troopers on August 15.

I love watching early silent movies, they give such a wonderful glimpse into the past.  La Voyage Dans Le Lune, A Trip to The Moon, is one of the most interesting.  The 1902 film created by Georges Méliès  is the first science fiction film and is known for its innovative special effects, set and costume design, and camera techniques.

1940s style overalls have been on my vintage style wish list for a long time.   There is something so American about overalls, they call to mind favorite American literary characters Huckleberry Finn and Tom Sawyer.

Women didn't really wear overalls until the 1930s and 40s  when they began farming for the war outfit and entered the work force in greater numbers. 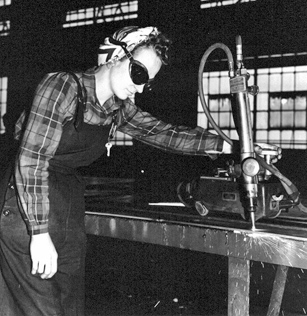 Vintage style overalls are probably a fairly easy sewing project if you can sew, but as I can't evean attach a button I went to Allure Original Styles on Etsy.   They were very helpful and I got the perfect pair of convertible overalls that can be worn as pants as well as overalls.  I wore them for a vintage spotting nice bike ride through the lower Manhattan.

My husband and I had delicious old fashioned Ice Cream Sundaes and coffee at Van Leuwen Artisan Ice Cream. 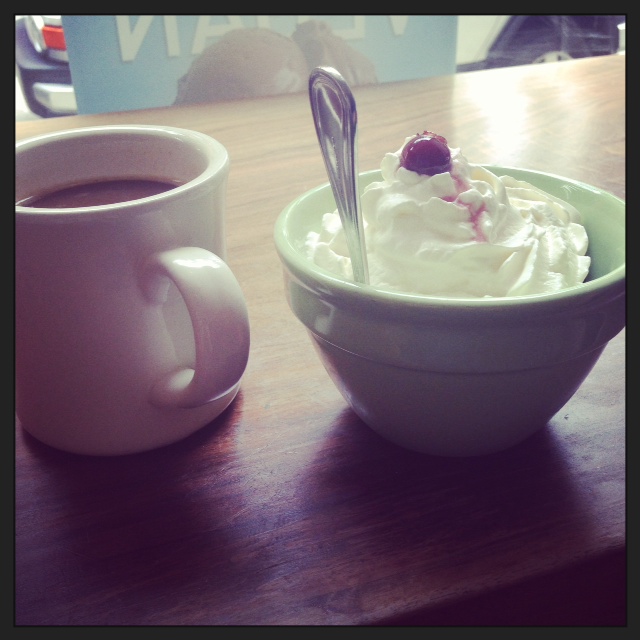 We drove past the Marble Cemetery, and old grave yard I had never notice before despite spending lots of time in this neigborhood. 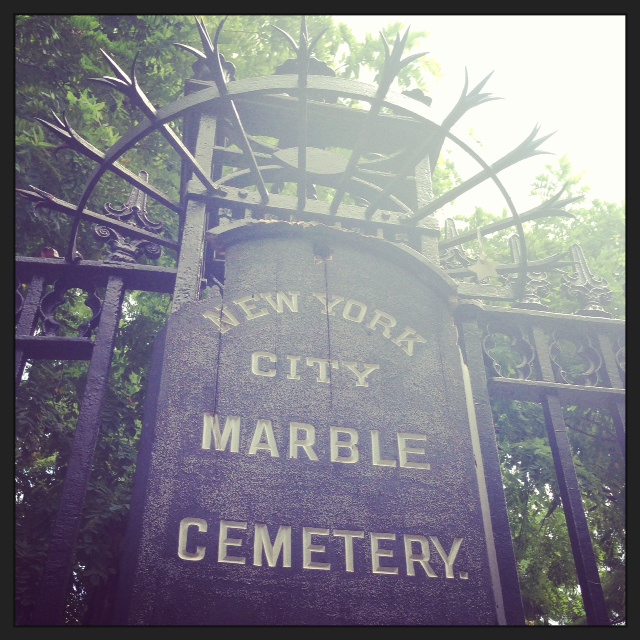 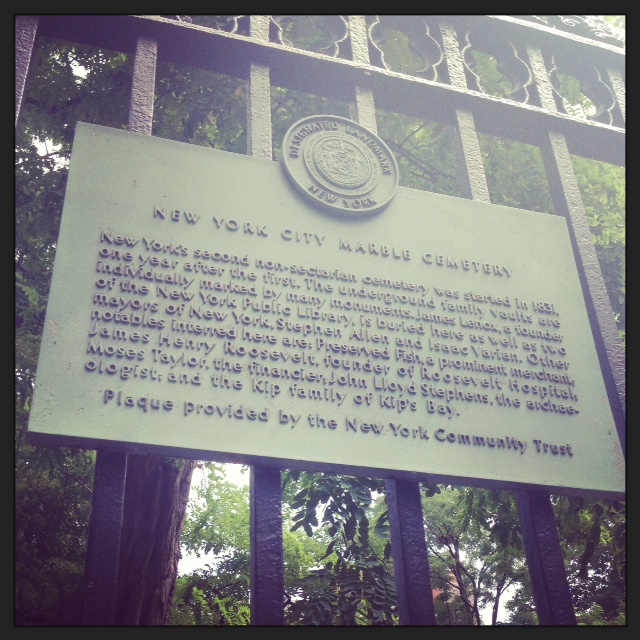 This car was definitely a vintage sighting, it looked like it had been parked in its spot since about 1972. 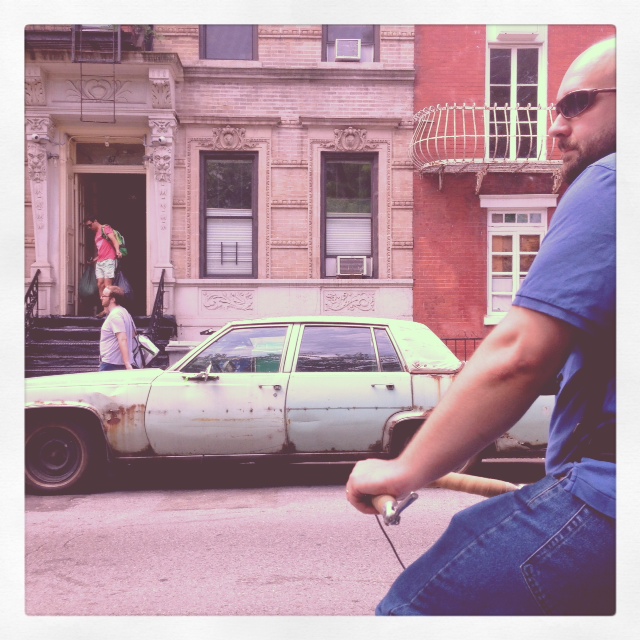 Of course for a dog owner the most beautiful part of any outing is coming home and being enthusiastically greeted by your dogs.